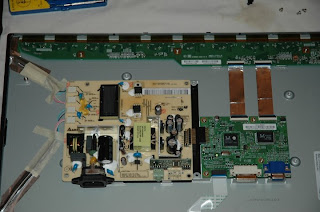 Few weeks ago, my sister-in-law asked me to fix her LCD monitor, which became dark, very dark when turned on. It's a 19" Westinghouse model L1975NW. I took the back off, and notice the board has few components which responsible to drive the back-light of an LCD screen. After tracing out the circuit, and identify failed components (a surface mounted fuse) I went ahead order parts at Mouser Electronics. Even though only the fuse is definitely failed, I also order new FET & capacitor, just because I have no way to test them. While waiting for the parts to arrive, I removed the FET, capacitor & the surface mounted fuse. Few days later the parts arrived, I soldered them on the board and very happy that the monitor is now fixed. If there are anyone interested, I'll post the part lists & locations of them on the board. 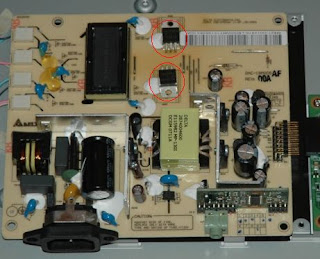 Here is the picture of the power board, with the FETs circled. Unfortunately, I did not take the picture of the other side, where the surface-mounted fuse resided. After removed these components & replaced with new ones, the monitor works again. BTW, when I order the FETs, I also ordered the clip on heat-sinks for them, I believe that these FETs were driven so hard & so with the heat sinks they will certainly help prolong the life of the new FETs.

Here are the list of parts that I ordered:
Removal of the FETs was not that bad, but soldering the surface mounted fuse was a bit difficult. My eyes aren't as good as they used to be, so I need a magnify glass to perform this task.

Also, correction: I also ordered the capacitors, however I did not replace them, for I believed replacing the FETs & fuse would be sufficed, and indeed they do. So, after replaced the FETs & fuse, I put them back together and the monitor is revived.
Posted by Vương Quốc Anh (Ly) at 5:17:00 PM No comments: 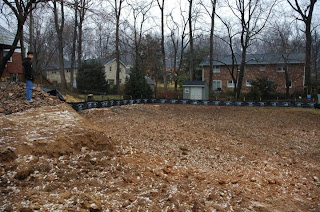 The demolition company took a bit more than 3 days to bring the whole house down, flatten the lot, took out few trees and prep the place for it ready to build a new house on top.

Every day, we drive by the lot, anxious & curious of the development. So, when we pick up Thuy. from the Williamsburg Middle School, we swing by the lot & look. We were fascinated with the front-loader & workers busy bringing the house down & taking load after load of debris out of the lot. The house once was there, now no more. It's an empty lot, ready for something new, something we are going to call "home".
Posted by Vương Quốc Anh (Ly) at 5:01:00 PM No comments:

Before dosing off to sleep, I often think about the day, about what I've done, about whether it was a productive day. Last night was no exception, and I think I had a pretty busy & productive day. For some reasons the day goes by fairly quickly when you staying at home! In the morning, I take the kids to school, 3 different destinations at 3 different times. Once I've done that, I check & answer all emails. Then come the time to check for newly posted positions (yeah, I have to look for job, the money is running out pretty fast!). I had my resume on CareerBuilder, Monster, USAJobs, many different companies as well as government agencies, so applying for available positions is basically login & clicks. Some of the applications require short answers or essays, but comparing to finding jobs in Sunday papers, the online method is much better.

It must be the third day of this Winter which snows. It beautiful to wake up & see the powder white snow slowly falling from the sky. Well, only if you can stay inside, sit near a fireplace & read a good book. For me, I had to wake up the kid, prep him & take him to school. The driving was not bad, the high temperature kept the snow from sticking on street surface, which is good.

Got to talked to a head hunter about a programming contracting job, and then a potential interview with Daon. Daon is a company doing biometric solution for many customers & agencies, so ... quite interesting. Looking forward to an interview. This afternoon, I also have an interview with CACI, will see how that pans out.

Overall, this is a good week, with two interviews and few more in the pipe line. If one of those can land me a job, then I would not feel so edgy & worry. I know, I should not feel worry, should keep my focus & positive thinking, but it's just hard to do when both of us are out of job. Each day goes by, is another severance day gone.
Posted by Vương Quốc Anh (Ly) at 11:42:00 AM No comments:

Don't know what to do

I went in to work today, just because staying at home is so difficult to focus, can't have anything done.

I've tried to open up the Visual Studio at home, trying to get some framework for the Silverlight & C++ modules up, but still ... way too hard to focus. My mind is racing at 100MPH, ton of questions, but could not find any acceptable answers. Cigarette helps a bit to calm me down physically, fingers less shaking, but still it does not help my nerves.

The Age of Autism

A while back, when I was discussing the rate of autistic children increase with my sister, a PhD at UC Davis, and she pointed out that the result is fairly inconclusive due to the fact that the diagnosis for autism is getting better, thus able to identify more children diagnosed with autistic. Well, it was a reasonable argument.

On Jan 7th, 2009, UC Davis M.I.N.D. Institute study shows California's autism increase not due to better counting, diagnosis, since 1990. So how can we answer to that? The study shows the increase is "seven- to eight-fold"! If this does not raise an alarm in our government, I do not know what else.
Posted by Vương Quốc Anh (Ly) at 8:17:00 AM No comments:

Bảo likes it, Thuỵ likes it, other autistic kids love it; but not Huân. Video games are so sophisticated and attractive even for adults; and I though Huân would like it, but it's not the case. Huân looks at it, watches his brothers play, but not participate. We have tried few times, Bảo & Thuỵ chose the appropriate or easy games for him to start, but he did not show any interest. He would hold the control if it was given to him, or asking him to hold; but after few try of pushing the buttons, he would let go, walk away and back to his Thomas trains.

But I am not giving up just yet, I have one more try: Wii fit! Yeah, the kind that you have to move or balance your whole body; not just the fingers. So, I am looking forward of getting the wii fit & the balance board for him to try. But before getting the game, I need to learn how to get him open up to try with anthusias, he must be the one who wants to play and not playing because we want him to.
Posted by Vương Quốc Anh (Ly) at 3:54:00 PM No comments:

It's cold & raining today. That just make me want to stay home, curl up in bed, read a good book or watch a mindless movie. You know, the movie which you can take 5min break and still able to figure out what's going on; the kind of movies which does not requires viewer to think or pay close attention. When I have something to do, a book to read or need to think, I like to put that kind of movies on, and then do what I need to do. Over the time, I learn that I become more productive, and less stress. The movie acts like a background soothing environment for me, setting the backdrop for me to think. After an intense thinking session, all I have to do is glance over to the screen, that eases my mind, allowing me to get back to thinking or continue reading.

Got to work today, and my colleague's email caught my attention. It's a link to a web page, which shows pictures of frozen soap bubbles. Kind of neat. If it's cold this Friday or weekend, I will definitely try with my kids.
Posted by Vương Quốc Anh (Ly) at 9:29:00 AM No comments: